Why does Genuine role of the gut bacteria

1. To datealpha keto glutarate (AKG) has been shown to participate in more than 3000 reactions throughout the body. Thus it seems that AKG would be a good candidate to be molecule of the life.

2. Numerousdicarboxylic acid sodium dependent transporters (NaDC-1) are found within the gut (Buddington et al, 2004). However most of the food we ingest on a daily basis contains little to no AKG. Why then do AKG transportersexistwithin the gut mucosa? Are they waiting for a miracle or for enterally produced AKG?

3. Nota bene ! The NaDC-1transporter,as well as the receptor for AKG - GPR99, which are generally found in cells which respond to AKG (He et al, 2004),arepresent in the brain, kidneys and other tissues.

4. Is there perhaps another source of AKG from the gut? Yes – there is - but it is often overlooked!

5. Let’s ask some simple questions. What is the genuine primar role of the gut bacteria?Why are these microbes present in the gut? What kinds of microbes arepresent in the gut? The answers to these questions are rather simple, but unfortunately adulterated by modern bacteriome research/science!!!

6. The main functionof the gut bacteria is to scavenge ammonium ionsand in doing so they protect host protein. The gut bacteria should assist in the survival of the host- not vice versa as is sometimes postulated in recentpublications. Gut microbes should primarily protect the host from losing protein/nitrogen - they decided if host is alive or dead – “to be or not to be”.

8. GIT bacteria – similarly to the Rhizobium bacteria in plants - are able to fix ammonium nitrogen and convert it to amingroup. As a consequence AKG is converted to glutamate. Yes – now we see - gut bacteria produce AKG. Some of the bacteria, for example E Coli, produceeven double the amount ofAKGthan what they actually need and the AKG is able to pass through the E. Coli membrane, using the same NaDC-1 transporter (Lo, 1977).

9. See Figures 1 and 2 below for the rest of the explanation. Maybe we should be asking ourselves why we have such little AKG as we age, when AKG is theoretically produced in large amounts within the mitochondria?

10. The answerto this question is easy: the regulatory (plasma, interstitial fluid) AKG is coming exclusively from the gut bacteria – mostly from E. coli. With aging we loosing gut bacteria. Commonly used antibiotocs help in it very much!!!

Fig. 1. Gut AKG and bacteria in a healthy creature 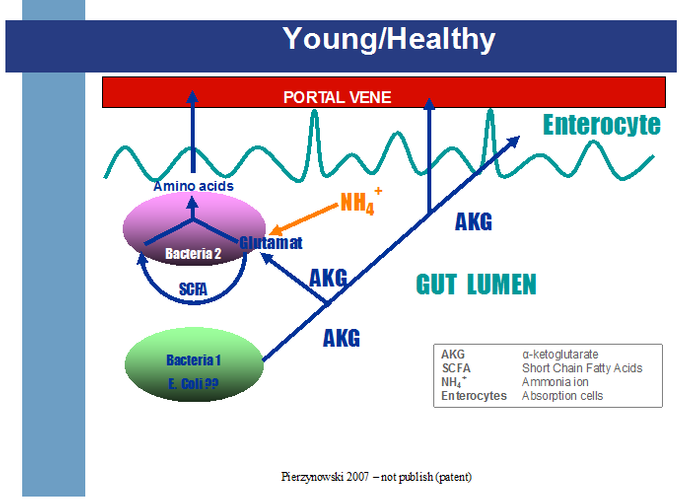 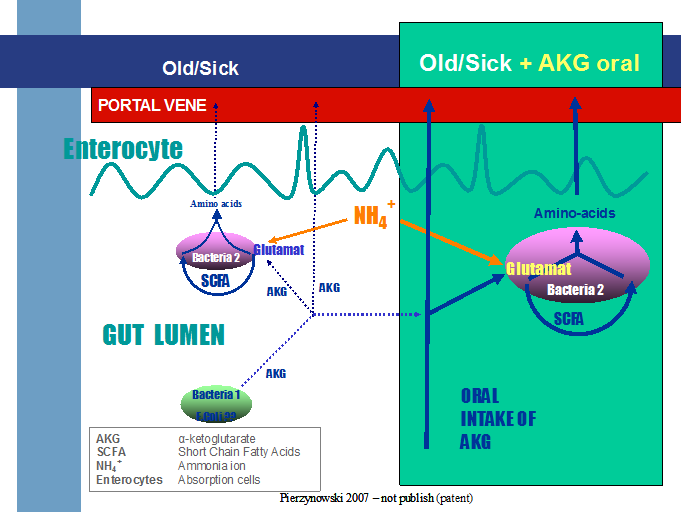